Katica Garoska Acevska was appointed keeper of the Minutes of the meeting.

The EB BMU president, Martin Solar welcomed all delegates to the 22nd BMU meeting. Worm welcome to the EUMA officials, colleagues and friends who are joining the synergy & the power.
Greetings from the host Jovica Ugrinovski expressing his pleasure that this is the first time from the World sport history all three world mountaineering associations to have joint meeting.
Greetings by the EUMA president Roland Stierle expressing his pleasure to join the session.
1. Approval of Agenda (published in BMU magazine)
2. Minutes from the BMU GA in Prague
Approval of the Minutes of the 21st BMU GA meeting in Prague, Czech Republic were accepted unanimously with no objections. Due to the COVID restrictions some member associations didn’t attend the 21st meeting in Prague.

3. Report on activities
Realization of the activities between two meetings (including preparative activities and basic information about forthcoming events and activities).

• Balkan mountaineering competition in Montenegro (BMUMOC) Vucje-Niksic, September 24-26, 2021 was successfully performed.
• Balkan mountaineering orienteering competition in Slovenia 30 Sept-2 Oct. Pokljuka, Rudno Polje (1380m). Presentation given by Damjan Omerzu. Delegates will receive the info to share with their associations.
• Photo exhibition organized by the Macedonian Federation, presentation given by Jovica Ugrinovski, was successfully realized in spite of the pandemic. More than 300 photos were accepted. Jury unanimously selected 3 photos. The jury was not fully satisfied by the quality of the photos, but the goal was achieved. Recommendation this tradition to be continued.
• Expediton issue. At the last meeting was agreed that Turkey will prepare the new expedition. Ersan Basar presented the programme which was already distributed to BMU members. Time needed to prepare the permit. 5 participants from each country.
• Serbia, outdoor rock climbing competition. Balkan rock climbing championship (and festival) scheduled for September 17-18 in Nishevac gorge (35 km from the city of Nish, close to the highway). Invitation letter will be soon distributed.
The Climbing association of Greece during the last BMU meeting announced the Sport climbing marathon in Metheora in the same time. There is overlapping of these two competitions. The BMU president Martin Solar suggested to discuss eventual postponing of Serbian event.
• Serbia: Balkan Youth Mountaineering Commission. The idea came while Andrej Ivosev from Serbia was president of this commission. All youth commissions to have meeting next fall which will be the exchange of good practices.

• Celebration of the Day of the Mountaineers & Mountaineering associations of Balkan countries (Bosnia and Herzegovina) proposed by Ermin Lipovac for June 2022 during the previous GA BMU meeting in Prague. The new delegates from BiH, Rasim Radonja and Hazim Basic proposed new ideas: 1. Organization of one ceremonial event to help the development of mountaineering tourism in B&H. 2. Organization of several mountaineering days (end of September), many people to visit BiH. They will send official info about the event. September 21th to have the Ceremonial Academy.

4. EUMA future – the role and position of regional mountaineering organizations
• The future of EUMA. New EUMA model. In February EUMA presidency and BMU EB had a meeting in Ljubljana (Slovenia) about the future of these organizations. Presentation: Roland Stierle. To make an offer to BMU about the future organizational scheme of EUMA (focus on climbing, huts, 2023 Erasmus will finish. New Organizational Chart General Assembly auditors, presidium, administrative office) The way how the regional organizations integrate into the EUMA like the umbrella organization. There are two regional mountaineering Organizations in Europe (BMU and CAA). 2 proposals: if 1 org. want to keep their legal status it can cooperate; internal body with regional councils integrated in the work of EUMA more strongly, to have the year meeting. Not supported by EUMA budget.
Martin Šolar: BMU is strong org. In the future if we follow this model, some member organizations could have the place in EUMA.
Jovica Ugrinovski: the administrative question matters. Each BMU member is collaborative member of EUMA. BMU was registered in Skopje. BMU is working well, EUMA is working well on its side.
Bojan Rotovnik: the idea was initiated in Prague, BMU can choose to be integrated in EUMA. With Erasmus project there is platform. In the future there will not be platform, no commissions, coordination group, can’t do operational business. In the future the voice of EUMA won’t be loud if regional organization will not merge with EUMA.
Jan Bloudek: the strategy of EUMA should be flexible. EUMA could apply for other projects.
Andrej Ivosev: regarding the Statute BMU is allowed to organize regional activities, events (but not from the EUMA budget)
Damjan Omerzu agrees with Jovica Ugrinovski. How to optimize the activities on international level. Financial part aside, we have to work towards optimization and integration.
Martin Solar: Executive board of BMU in February agreed with this scheme. This is a new issue, this model gives more chances for the BMU (some of you will be elected as leading persons, stronger influence in the organization). Do you agree taking the legal status issue aside, suggestion to try to find legal way. Personally Martin supports this new scheme. Regarding the legal status we have to discuss.
Roland Stierle: we think that we can go independently, but according to Belgian law the legal entity to be within this organization is not possible. If we support this scheme next year we can change several articles of EUMA statute.
Jani Ziso: the same problem when we discussed about UIAA and EUMA within the UIAA. What will be the interest of BMU, how to collaborate with EUMA.
This topic will be discussed tomorrow at the joint meeting of all three organizations (UIAA, EUMA, BMU.
At the end of the discussion Martin Šolar asked delegates for supporting the new EUMA Organizational Chart.
BMU GA unanimously supported the new EUMA Organizational Chart.
5. BMU action plan 2022/23.
Many activities in the future. EB of BMU will meet after the autumn events to discuss next year core activities. In the future some association to organize training of mountain guides, mountain safety etc. To think about this and give suggestions.
6. Future meetings: 2023 Greece, 2024 Croatia. The precise dates to be announced.
BMU EB last year of mandate, new EB should be nominated for the next meeting.

Closing speech: BMU president Martin Solar summarized the most important points of the General meeting. A special thanks were expressed to hosts for the successful organization and to all the delegates for their participation.

Official photo of the participants

Good organization, thank you words. Thank you notes to Jovica Ugrinovski.
Distribution of presents.
The meeting ended at 17.30. 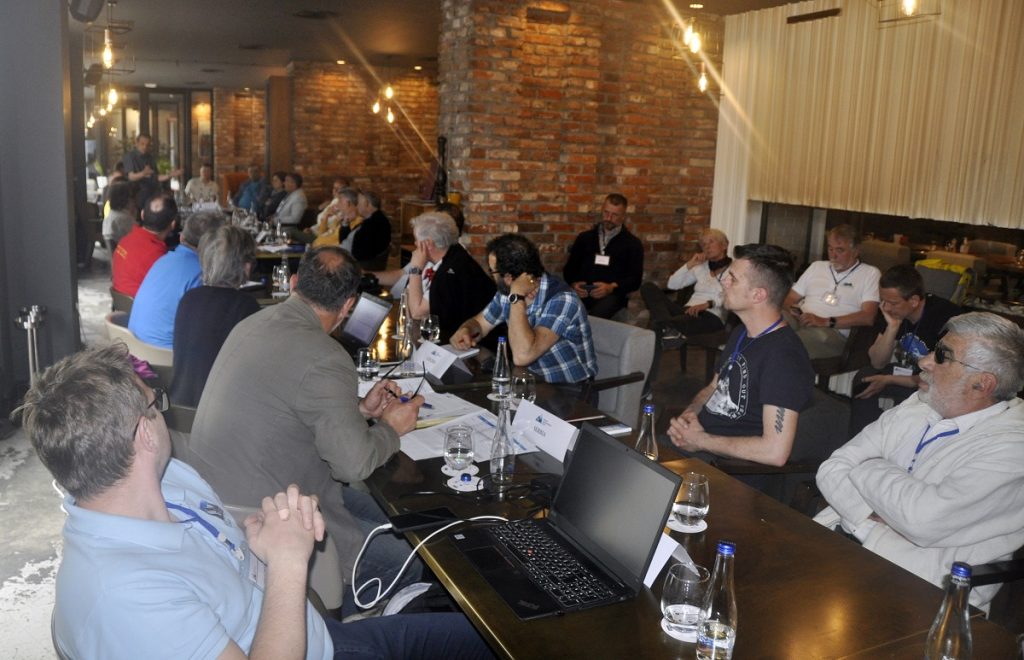 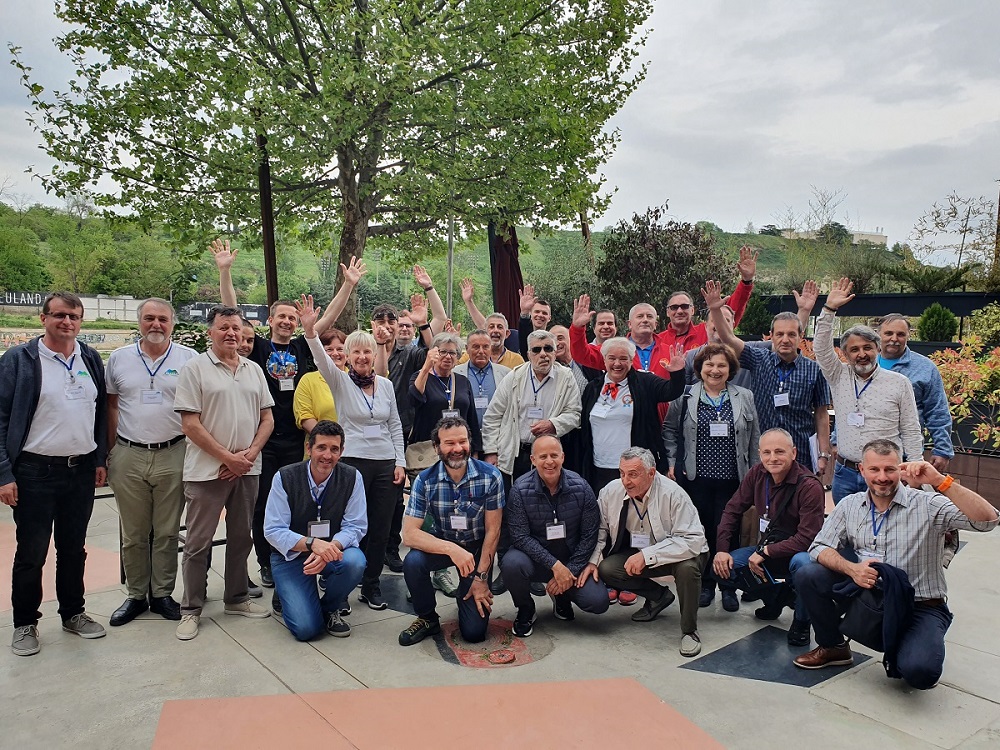