Balkan mountaineering orienteering competition 2022 yet again took place in Pokljuka, Slovenia, after six years. Event, organised by MK PZS, lasted from 30th of September till 2nd of October and was attended by 31 orienteering teams from 6 Balkan countries. Weekend passed quickly leaving us only with pleasant memories and new friends.
The competition has several different names. We named it IMOC (International Mountaineering Orienteering Competition) six years ago, when we first organized this competition under the MK PZS organization. It also took place on Pokljuka. Later, it was renamed to BMUMOC (Balkan Mountaineering Union’s Mountain Orienteering Competition).

The first competition was followed by the second and so on until it became a tradition. It is organized by a different country every year. Competitions took place in Slovenia (2016), Serbia (2017), North Macedonia (2018), Bosnia and Herzegovina (2019), Montenegro (2021) and Slovenia again (2022). 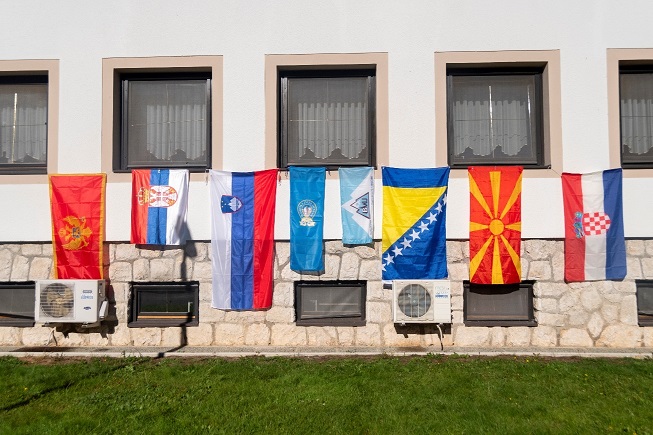 After several months of thinking about where to organize the competition, we concluded, that the place with combination of a good orienteering terrain and a space, big enough for accommodating so many people is Pokljuka.

The competition was attended by 31 teams from 6 countries: Bosnia and Herzegovina, Montenegro, Croatia, Serbia, North Macedonia and, of course, Slovenia. Teams from Slovenia earned a place in this competition at the Slovenian Mountain Orienteering Competition 2022 (SPOT 2022), which took place on May 21 and 22, 2022, organized by the Savinjska Mountain Orienteering League and the Youth Committee of the PZS.

The Balkan competition takes place according to certain rules, which were set at a joint meeting of representatives of the countries. Unlike SPOT, two matches are organized here for all age categories. For our youngest and oldest categories, this means one match more than usual (a night match has been added), and for the other age groups one less (instead of two daytime matches there is only one). There are also fewer age categories at IMOC:
• Pioneers (up to 15 years old),
• Juniors (15 – 18 years old),
• Seniors (18 years and above),
• Veterans (45 years and above) 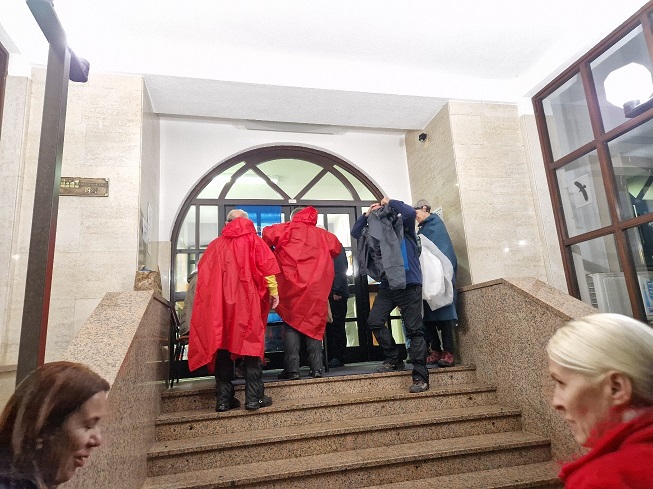 The competition lasted three days. Friday, September 30, 2022 was dedicated to the arrival of the competitors at the venue, distribution to all three accommodation facilities, dinner, opening greetings and a meeting of the representatives of the countries and night match.
It was raining on Friday night which meant, that in addition to the basic equipment, the teams also had to carry protective gear for the rain. Slovenian competitors are already used to this, as it has often rained at SPOTs in previous years. Teams from other countries also braved the weather and bravely set out on the course itself. After arriving from the night match, the participants took time to socialize, unpack (if they had not already done so), rest, and eagerly waited for the results.

On Saturday, after breakfast, there was another meeting of the delegates, where we made a short analysis of the night match and presented the instructions for the day’s match. Each team had to show at least one first aid kit, one bottle of water when arriving at the starting point, and each member had to have suitable footwear. Each team solved theory tests and drawing tasks before going on the track. 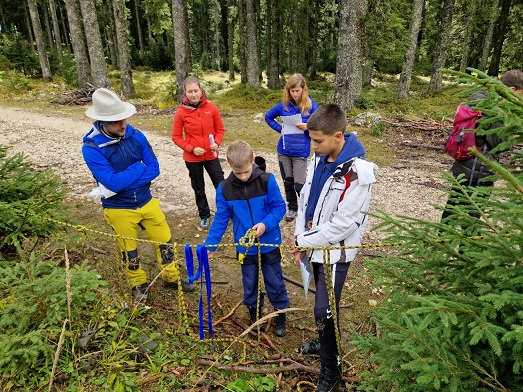 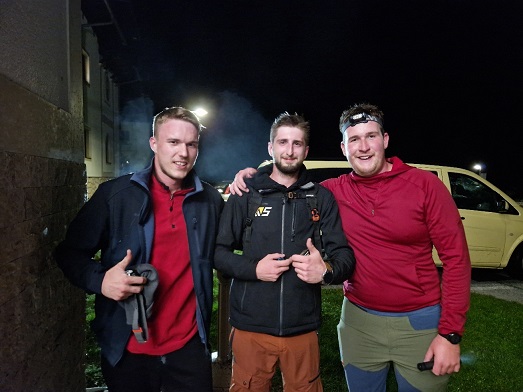 Image 4: Team PD Ruše – Joleji. Do you think the image was taken before or after the match?, photo: MK PZS archive

All teams also had a live point on the field. This year the teams demonstrated their knowledge and knot tying skills. The youngest category received three specific knots, while all the other categories drew three random knots from the set they received even before registering to the competition. According to the rules, the heaviest category (Seniors) has one additional live point, which the other categories do not have and we do not use it in Slovenian orienteering competitions either. This is the point where the team is split into three parts and each team member (or pair) is given a new card on which some points are drawn that are not on the main card (they are given this at the start of the course). Each individual or the pair must find these points and then reunite with a team at the last point of the temporary map. The second evening took place in a much more relaxed and playful atmosphere, as the contestants no longer had obligations. 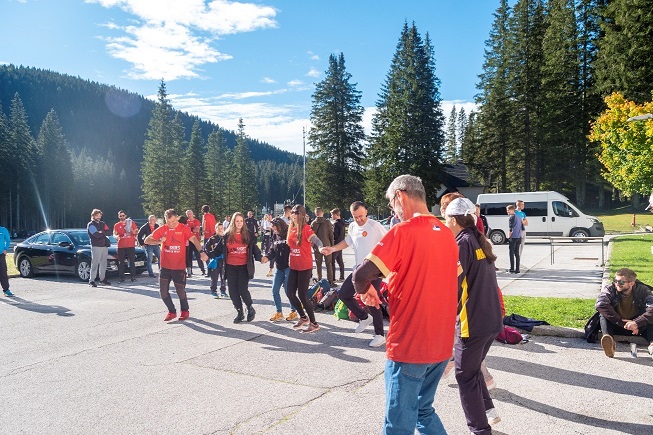 Image 5: During the wait for the results some of the competitors entertained us with some traditional dances, photo: MK PZS archive

The last day was devoted for packing, tidying up and the last meeting of the representatives of the countries for a short analysis and ceremonial awarding of achievements and medals. Martin Šolar, the president of the BMU (Union of Mountaineering Organizations of the Balkans), led the ceremony. He arrived exactly 10 minutes before the start of the award ceremony, he signed all the awards and led the award ceremony sovereignly. With his opening speech and the words “Judges are crooks!”, he ended the competitive atmosphere so that we could all say goodbye with a smile and no hard feelings.

Martin Šolar summarized his thoughts as follows: “The Balkan Mountain Orienteering Championship is actually the biggest event within the Balkan Mountaineering Association. This is a federation that was established more than 10 years ago, where 10 or 11 countries are participating today. Not only former Yugoslavia, but also Greece, Albania, and Bulgaria. Representatives of the former Yugoslavia take part in these competitions, perhaps precisely because of the tradition of mountain orientation. So here, at Pokljuka, we hosted 6 countries. In fact, all former republics. The participants were clearly satisfied and so were we (the organizations).” 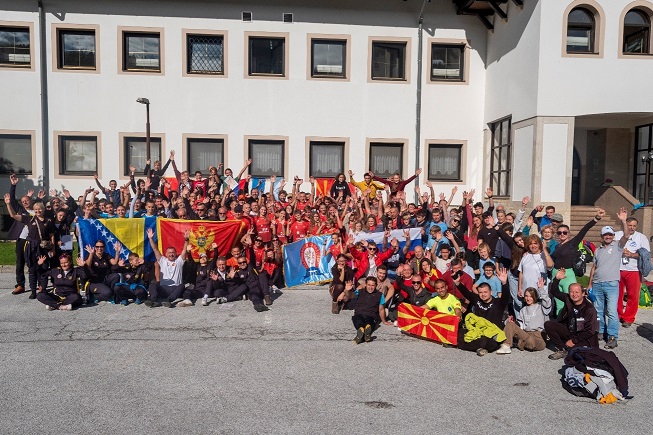 When all the competitors went home, the organizers cleaned up and once again checked whether everything was where it should be, said goodbye to the friendly soldiers at the reception and, as hungry as a wolf, went to a well-deserved lunch. Each of us ordered a large pizza and ate it all. Which just proves that we really did our best through the weekend. At this point, I would like to thank the entire team, their time and invested work contributed to the success of the competition without any major problems.

Intermediate and final results, tests with solutions, drawing tasks with explanations, cards, invitation, materials, etc. can be found on the PD Žalec website. Our computer technician Matjaž Žohar lives there, and for all mountain orienteering competitions where he is the leader of the organizational team or part of it, he carefully prepares a report in the form of all the documentation. 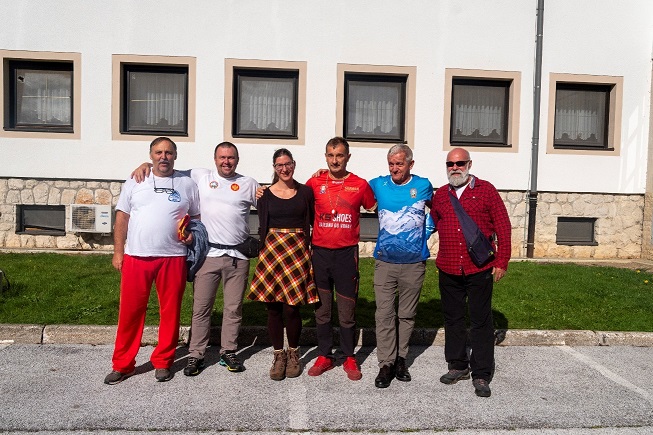 Finally, I would like to highlight the results of the Slovenian teams. Slovenia was second best country with several individual teams winning gold. Congratulations to everyone!!

P.S.: You are welcome to visit our social media profile and view photo gallery of a competition

P.P.S.:You are also welcome to read some thoughts about the competition, gathered by our routesetter Matej Trobec

P.P.P.S: You can also listen to radio broadcast Gymnasium on Radio Prvi, with members of team PD Polzela – Voluharji (Winners in Senior category) as main guests 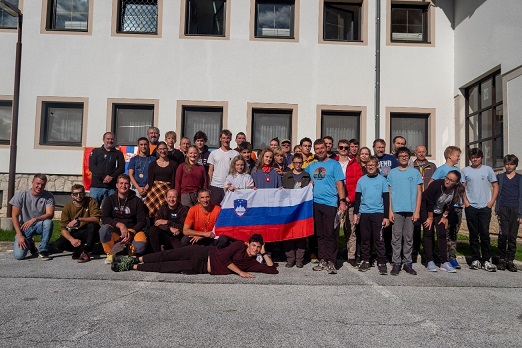